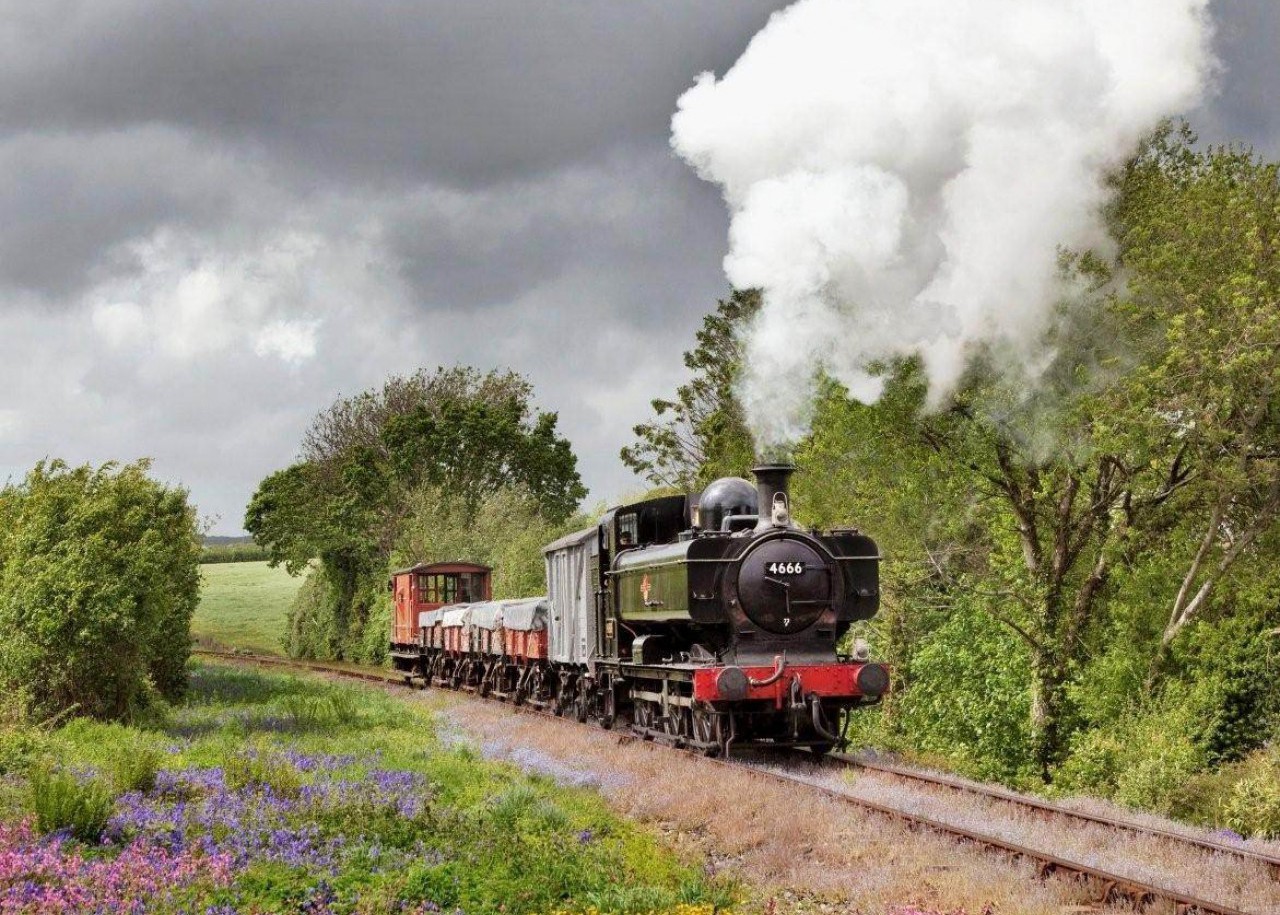 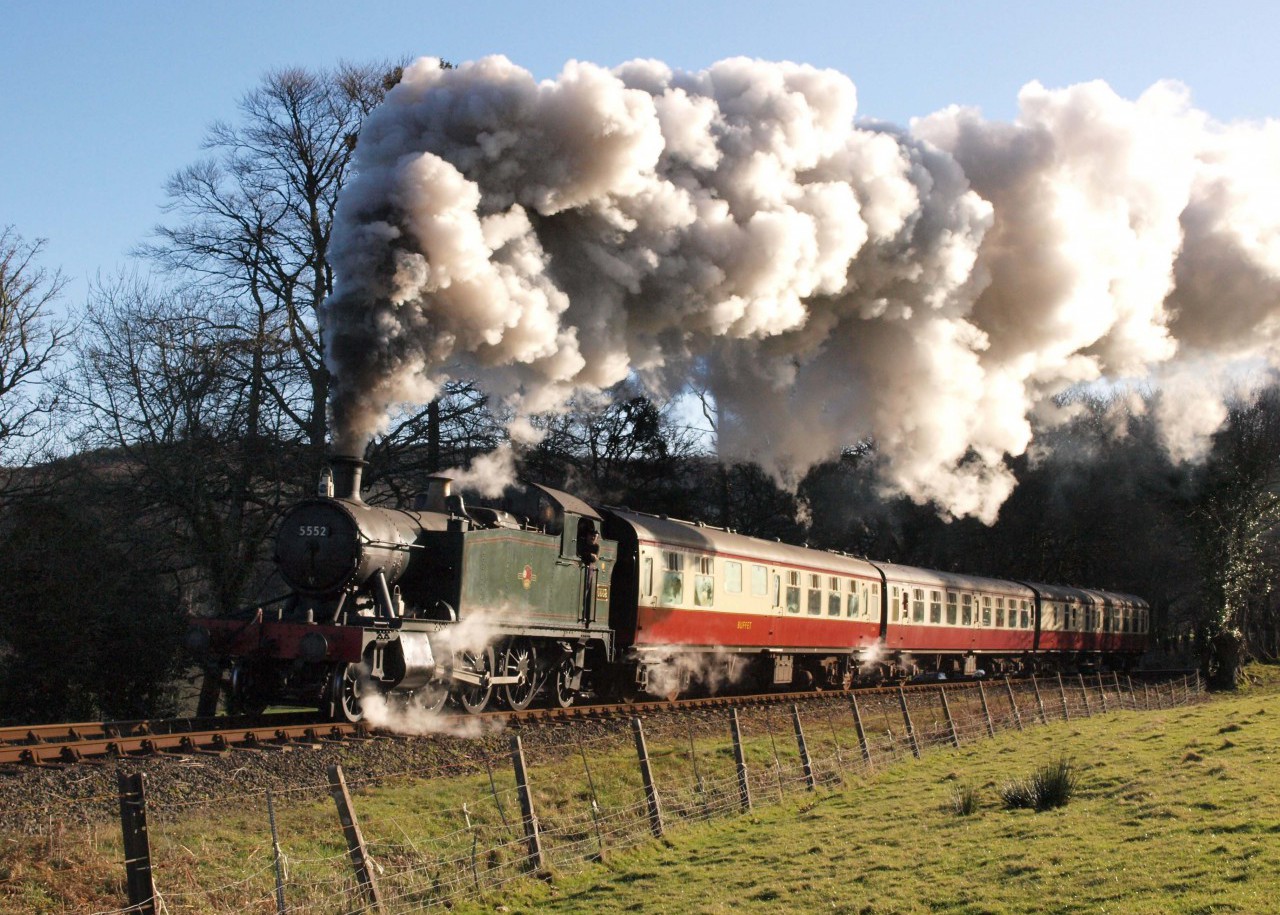 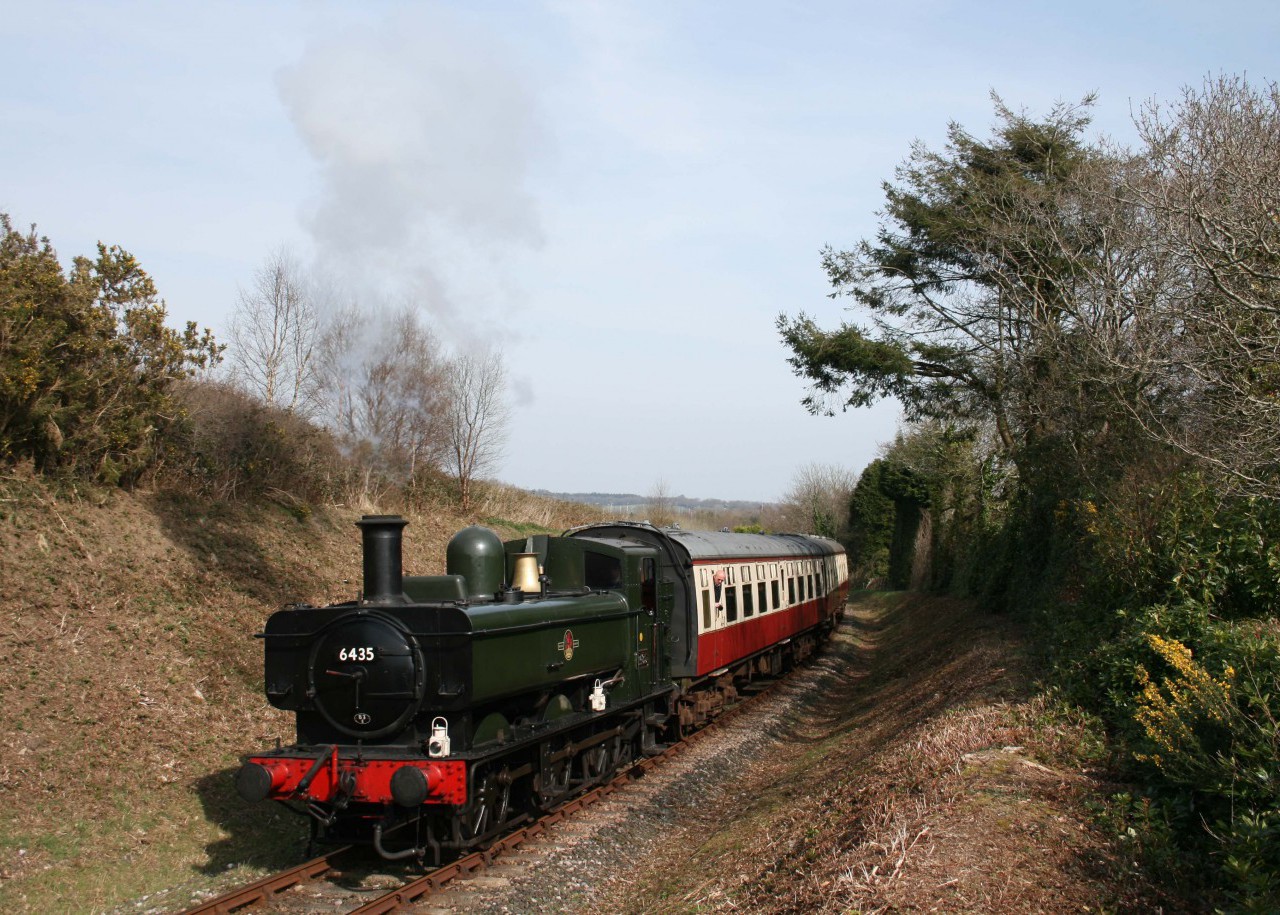 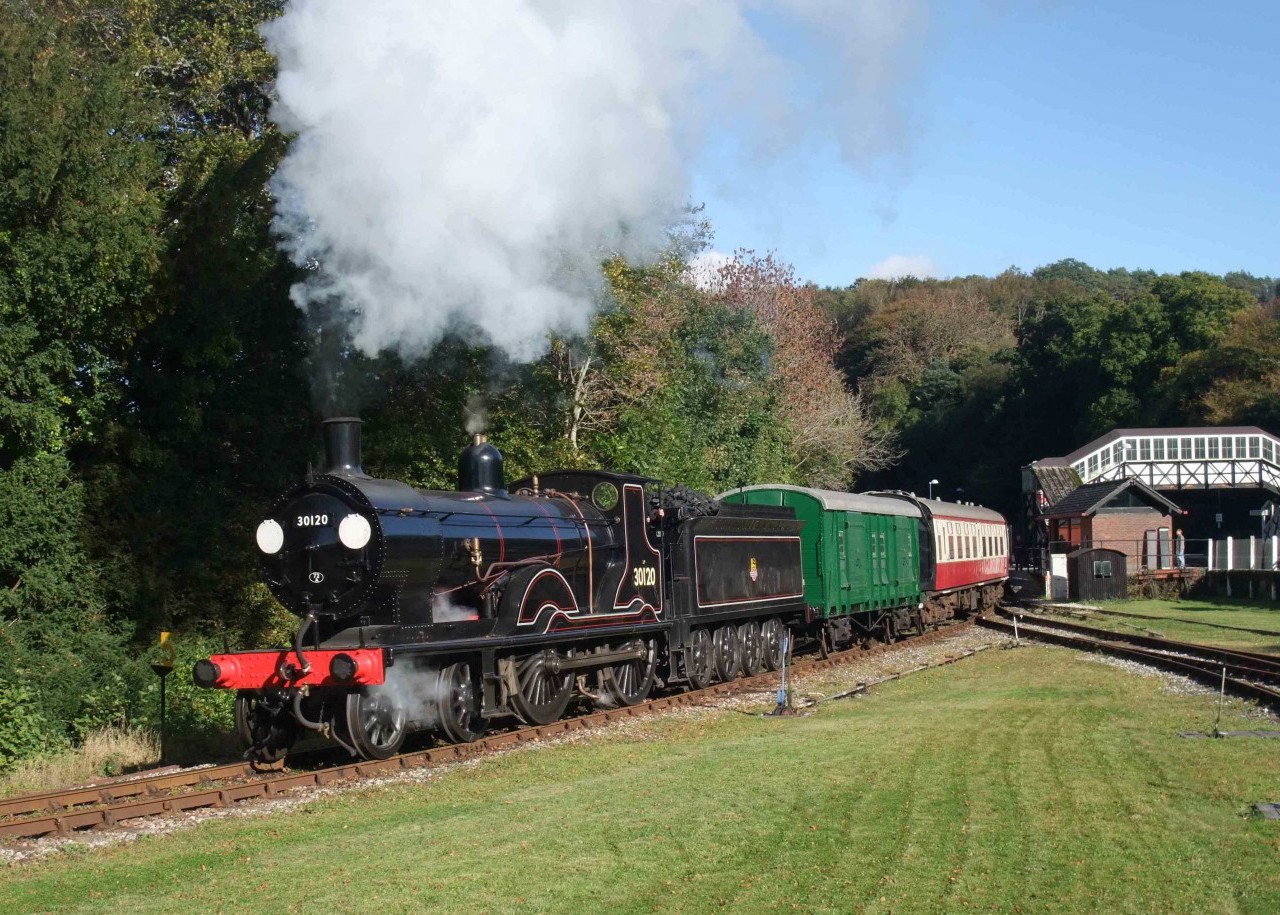 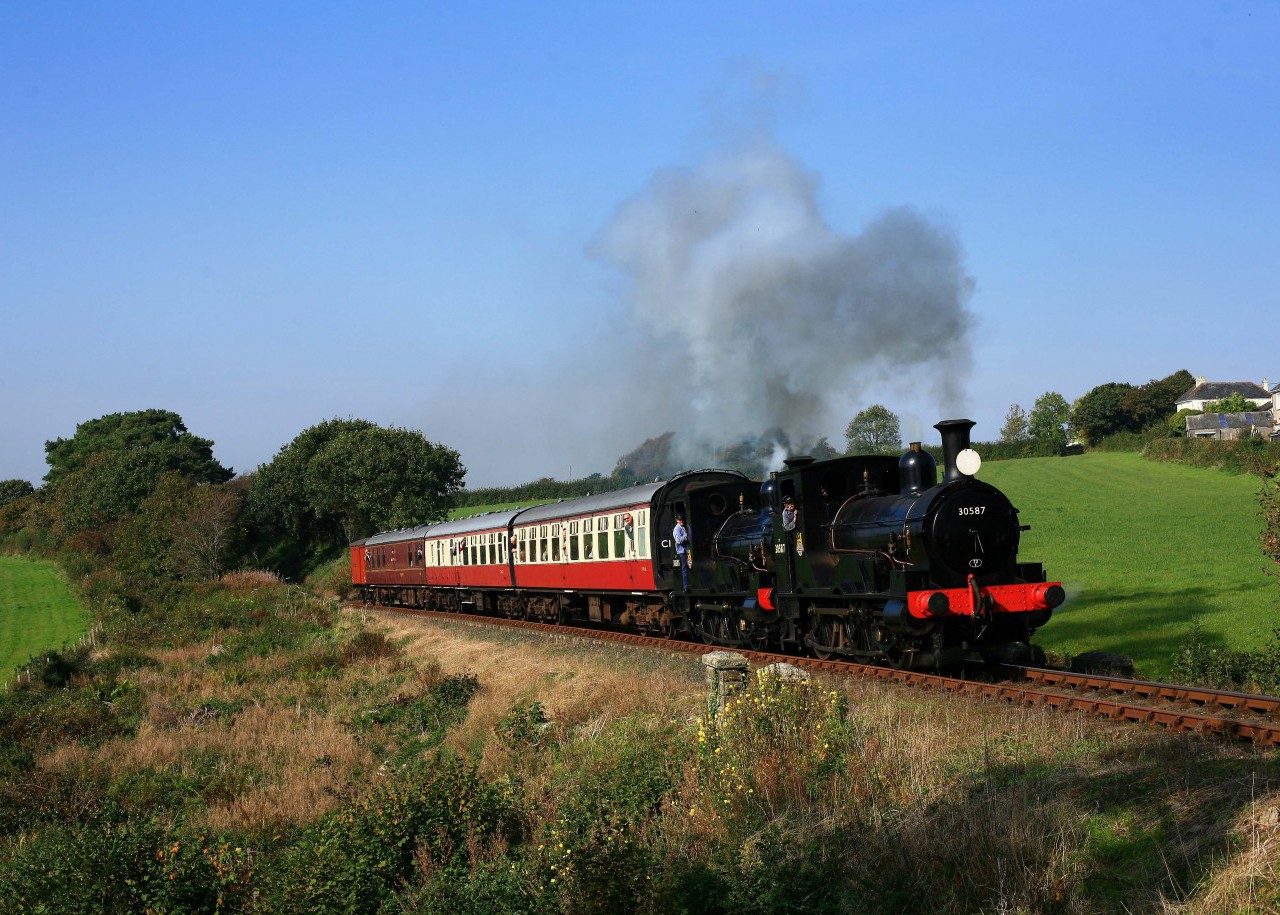 The only surviving pair of LSWR Beattie well tanks, Nos 30587 & 30585, head up the gradient towards Bodmin General.

6.5 mile line from Bodmin Parkway to Boscarne Junction via Bodmin General. The steep gradients (as much as 1:37) mean the locomotives have to work very hard.

Discover the excitement and nostalgia of steam travel with a journey back in time on the Bodmin & Wenford Railway, Cornwall’s only standard gauge railway still regularly operated by steam locomotives. Relax in style and enjoy a leisurely 13 mile round trip through beautiful countryside, taking in the sights, sounds and smells of a bygone age, as the era of a Cornish branch line in the 1950s reveals itself during the course of your journey. Trains operate from Bodmin General, the line’s main station where free coach and car parking is available, to both Bodmin Parkway station – where connections can be made directly with main line railway services – and Boscarne Junction, which is situated directly adjacent to the Camel Trail recreational footpath and cycle way. Passenger train services operate through the year, and run daily from late May to early October. There is a Buffet at both Bodmin General and Bodmin Parkway stations, and most services have a Buffet and Bar on board the train.There is also a souvenir shop at Bodmin General.

Special events are also held throughout the year - Steam and Diesel Galas, Steaming Thru the 40s and several family-orientated events, including an Easter Egg-stravaganza and the visit of both Postman Pat and Paddington Bear to Bodmin!

The Railway also operates a number of steam-hauled special trains through the season – including ‘Murder Mystery Evening Specials’, ‘Steam Beer & Jazz’ trains, a Luxury Dining Train and, during December, our very popular Santa by Steam specials.

The railway looks forward to welcoming you.   Come and discover Cornwall’s railway heritage at its very best  –  a great  family attraction! 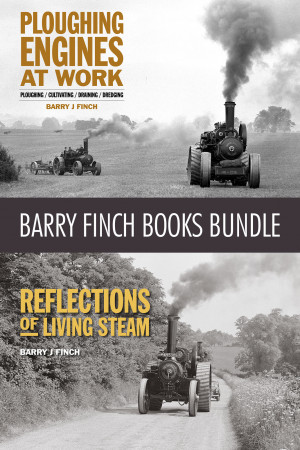 Get both 'Ploughing Engines at Work' and 'Relections of Living Steam' for a great price!

Bring back memories of a bygone time with two books of outstanding photographs by well-known photographer Barry J Finch taken through the 1950s and 1960s – now available at an outstanding price.