Brian Gooding takes up the story of a steam wagon in South America which hopefully is destined to come home to the UK.

Let the Younger Team Have A Go!

The younger members of the Searle’s team decided to deliver an engine needing boiler work by steam haulage. James Hamilton was there to follow the successful trip.

Trevor Smallbone concludes his look back at Jim Sarney’s 60 years involvement with the road steam world.

A village on the west side of the Exe estuary in Devon is home to a unique relic of a railway idea that didn’t really work out. Brian Gooding went to see.

The first cargo to be unloaded for over 50 years in London’s St Katharine’s Dock was delivered by sailing ship James Hamilton saw it – and further deliveries – happen.

David Hargrave dropped in on the farm at Tarrant Hinton where build up for the 2020 Great Dorset Steam Fair should have been under way.

This year the Fordson E27N Major celebrates its 75th anniversary. Bob Weir remembers a post-war classic that pointed the way to a bright future.

With no steam fair to report on, Brian Gooding delves back into his slide collection for a personal look at the biggest event in the rally calendar.

John Wigston has been an artist since the 1960s, and in recent years has specialised in drawing and painting steam engines. Bob Weir talked to him about a recent assignment in Teesdale.

Jim Wilkie has been digging in his archives to pick out some more photos snatched at different events. 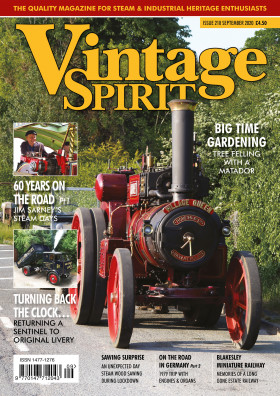